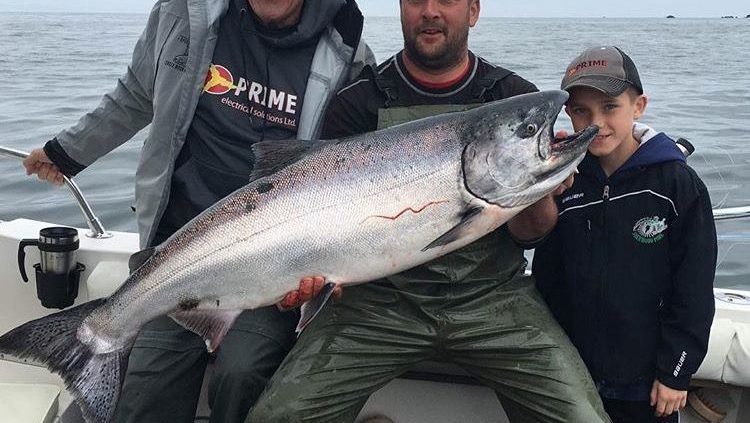 One of the biggest salmon that came back to the dock this summer was a 34.6lb Tyee, and came with a great story as well. Four generations of the Reid family joined us for a trip early in our season – father, son, grandfather and great grandfather. 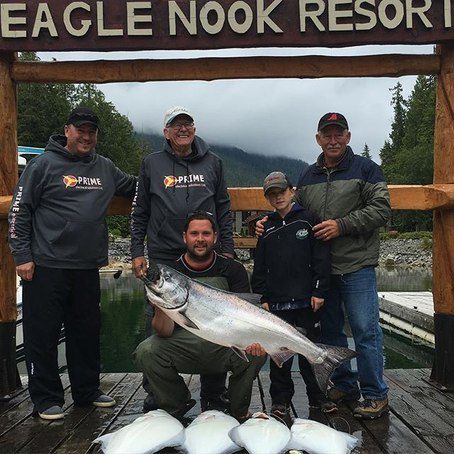 This monster of a salmon was reeled in by Charles Reid (second from the right), the great grandfather of the group, with his great grandson by his side. It was a moment the Reid family and Eagle Nook family will cherish forever.

They had some great days on the water, and we hope to bring their good luck back to the resort sometime soon! 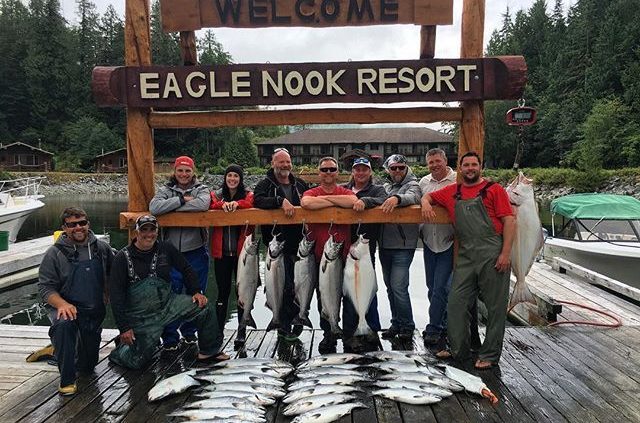 Our 2016 season ended on a high note with sunny weather and consistently good fishing right through until our last open day. The whole crew at Eagle Nook and Lucky Sportfishing would like to thank everyone who came and stayed with us this summer for being a part of making the season such a great success!

The resort is now shut down for the winter but we’re already taking bookings for 2017 – call or email us today to set up the ultimate fishing, dining and adventure package for next summer!

The guys from Yaskawa Engineering and Advanced Electrical were out last weekend for their fifth annual trip with us.

The beautiful weather held out, as well as the great fishing, and everyone went home with full fish boxes at the end of the weekend!

The group from Sonepar Electrical came out to Eagle Nook this past weekend for their fifth annual trip.

The weather was unreal, and the fishing was even better! Looking forward to doing it again next August!

Lisa is a guest and friend who has been returning to Eagle Nook for many years – she was also a part of our first annual Eagle Nook Derby earlier this season!

Here she is on Dan’s boat with a Chinook she caught last week during another visit to the coast.

New and returning guests were out on the water today, making up four different groups. Everyone had an awesome day out there, with limits on Salmon and Halibut!

The Kalb Contruction group made their annual trip from Las Vegas over the weekend. Their haul was so great we had to send their fish on a separate plane back to Vancouver!

Midwest Floor Coverings from Salt Lake City, Utah, had four groups come out to Eagle Nook at the end of July.

All groups had a great time on the water and at the resort, and everyone took home coolers full of salmon, halibut and rockfish!

Jenna, Rick, Robbie and Steve (not pictured) booked with us at the Abbotsford Sportsmen’s Expo in March and were out this past weekend.

They caught this 68 lb Halibut on their second day of fishing!

All the way from Las Vegas, the Bedard family is back for their fifth visit to Eagle Nook.

Here are Camille and Linda showing off some of their catch from Day 1 of their trip – still 2 full days of fishing to come!

The Willock, Lackey and Sukkel families were up last weekend and had great success in their two days of fishing.

Here are Mike, Cindy, Trudy, Bob and their guide Dan on their final day – limits on Chinook and Halibut in the same day!

Rob and Jesse with a nice halibut caught during their weekend trip. Bottom fishing has been great, with some big halibut, lingcod and rockfish coming back to the dock daily.

We had a couple days off between trips this past week which meant our team had some time to head out and do some fishing in the Sound. Jan netted this Chinook on the night bite!

Shannon and her husband Fred booked a last minute trip last weekend, driving out to the west coast from Alberta! Here she is pictured with guide Trevor and nice Chinook caught off his brand-new boat!

KLB Construction from Seattle had a great trip last weekend. Everyone limited out and took home a box full to the top with salmon, halibut and lingcod!

Four generations of the Reid family came out for our last trip. They had some great days on the water and even bagged the first Tyee of our 2016 season, weighing in at 34.6lbs!

After lots of hard work by Dennis Hetu, our brand new Eagle Nook Welcome sign is up on the dock!

The Kuzyk family took the first fish pictures with the new sign – a successful first day on the water yesterday with Dave landing a 24lb Chinook (pictured far left) along with some nice mid-teeners.

Our second pre-season derby of 2016 was a huge success – pictured here is Marcus with the top prize winning fish, a 23.6lb Chinook caught off of Long Beach.

Salmon are moving into the Sound and we had quite a few 20+ lb fish caught over the weekend.

Last weekend was the 5th annual Lucky Sportfishing Derby at Eagle Nook. 45 guests came out to try catch the biggest salmon of the weekend – the prize-winning fish was a 21.5 lb Chinook caught by Jesse Fisher (not pictured).

Our guests, guides and resort staff are looking forward to an awesome season ahead – our official opening day is Sunday, June 12th!

A couple of our guides entered the 2016 Sidney Derby on May 7th. Although they didn’t win they had a great time on the water and got a few nice salmon. Always a great call supporting local salmon enhancement projects!

2016 Chinook Salmon Forecast from the Department of Fisheries:

Department of Fisheries and Oceans Preliminary forecasts are out and participants from the most recent set of planning meetings this past weekend are saying that for the West Coast of Vancouver Island this season is going to be the Chinook Salmon run of the Decade!

West Coast Vancouver Island hatchery returns are at a combined ten year high with over 250,000, yes two hundred and fifty thousand mature Chinook returning for the 2016 season. To bring this number into perspective it is double the normal average.

Now on top of these astounding numbers you are going to see some girth. Girth is the circumference thickness measurement of a fish. This run is expected to be predominantly four year old Chinook, this means some nice “Tubby Tyees”. A Tyee a native term meaning the Chief of Chiefs, so in the case of a Chinook Salmon, one of which is over 30 pounds is referred to as a “TYEE”.

This is still not the full story, alongside and mixed in with this run as they land in the approach waters of Northern Vancouver Island then migrating south, will be the annual mass migration of aggressively feeding Columbia River Chinook. The adults this year are coming off of a record brood year from 2013 when over 1.2 million adults returned. With ocean condition indicators and the other voo-doo the fish wizards add in, they expect an above average return. Which in other words means over 800,000 Columbia River Chinook will be in this same area over the same time frame. Combine these Southern US bound with Canada’s West Coast Chinook Salmon returns and there are going to be over 1,000,000 Chinook Salmon foraging on their way South from Northern Vancouver Island to Southern Vancouver Island during June, July and August.

Lucky Sportfishing in Sidney, Vancouver Island BC this week. The Island is starting to see great fishing in the early season. This fish was caught on Jeff’s boat but several other LSF guides have had some nice fish this past week.

Early Season Chinook Salmon are in Barkley Sound. Had a great weekend with friends up at the Resort. We are not open yet but working at Eagle Nook Resort and Lucky Sportfishing has it’s perks. We love Salmon fishing on Vancouver Island.

Anchovies were slaying them from Vernon Bay to Main Bay.

EAGLE NOOK IS OPEN AND WELCOMES YOU TO OUR 2020 FISHING SEASON.

We are now taking bookings for June, July, August, and early September and will not be requiring a deposit to hold bookings.

At Eagle Nook Resort will be following all recommendations from the Provincial and Federal governments regarding COVID-19 Coronavirus including the implementation of: