Blog - Latest News
You are here: Home1 / Featured News2 / Fishing for Salmon in BC

The West Coast of Vancouver Island, BC is known around the world for its salmon fishing – both freshwater and saltwater. And sometimes the staff here at Eagle Nook Resort in Barkley Sound feel like we are in the centre of it all, based on all the fish we see being caught during peak season!

Wondering what types of pacific salmon are most popular in BC? Our guides at Eagle Nook Resort are here to help. Check out our latest blog post for some helpful tips and tricks for making your next salmon fishing trip a huge success.

Let’s start with a quick overview of the different types of salmon found in BC waters. There are five types of pacific salmon that are resident to the region, including Chinook, Chum, Coho, Sockeye, and Pink.

If you’re new to fishing, review a pacific salmon identification guide before heading out on your next trip. Being able to accurately identify the species of fish you catch is essential to staying within your daily catch limits.

Where Do Barkley Sound Salmon Come From?

Barkley Sound near Ucluelet on Vancouver Island’s West Coast, and home of Eagle Nook Resort, is situated in the migration path of millions of salmon. All five resident species of salmon pass through Barkley Sound from early spring until late fall.

The salmon in and around Barkley Sound are migrating south to freshwater lakes and rivers from Southeast Alaska, the Queen Charlotte Islands, and northern British Columbia. They’re on their way to the Stamp River, the mighty Fraser River, other local BC streams, or further south to Washington, Oregon, and California rivers.

One major helper of salmon populations in the region are Vancouver Island-based fish hatcheries, particularly the Robertson Creek Fish Hatchery in Port Alberni and Thorton Hatchery in Ucluelet.

Pacific salmon are anadromous, meaning they are born in freshwater and then migrate down streams and rivers to the ocean where they grow into adult fish before migrating back to the place they were born to reproduce (spawn).

Because salmon expend so much energy migrating and spawning, adult salmon don’t have energy to return back to the ocean, so most adult salmon die after spawning. At this point they become a food source for other life forms in the ecosystem.

Salmon Season in BC

In British Columbia, anglers enjoy an abundance of both freshwater and saltwater salmon year-round, with the most fish being caught from May to November.

The salmon fishing season in BC correlates with the migration schedule of salmon, known as the salmon run. The various pacific salmon all have slightly different seasonal salmon runs, as noted above.

Again, the top prize is the chinook salmon, noted above as being the tastiest. Due to their popularity and population numbers that ebb and flow, chinook can be tough to come by, but not if you’re with an experienced fishing guide who can take you to the best spots.

If you’re planning on booking a salmon charter in the Pacific Northwest, peak operational periods will generally align with the summer months. At Eagle Nook Resort, our fishing package rates are in effect from early June to early September.

How to Catch Salmon 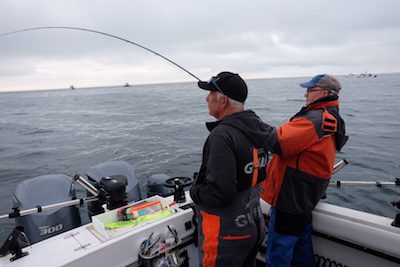 A great time to pursue salmon is on a slightly overcast day when the water isn’t too clear. The sunnier it is, the deeper and less active the salmon will be.

Catching salmon can be done a number of different ways. For offshore salmon fishing, trolling with a downrigger or planer is a favoured technique and will help you reach depths of 100+ feet – perfect for chinook who are deep water fish. Drift fishing and mooching with in-tact live bait are also popular methods of salmon fishing if you are looking for a slower presentation of the bait.

Live bait like fish eggs (roe), anchovies, herrings, sardines, or artificial lures are also essential. You can also experiment with big spoons, jigs, hootchies, spin ‘n’ glows, and flashers – any variety of glow, holographic, silver, or gold flasher will do. Scents can be helpful in masking human odours on artificial lures but are not entirely necessary.

When trolling off a boat, ensure you’re combining your bait with a razor-sharp hook (barbless hook only!) to effectively pierce the salmon’s thick jaw. DFO regulations make it illegal to use barbed hooks, use multiple hooks on one line, or to intentionally foul hook (snag a fish anywhere but its mouth) salmon in BC.

Read more DFO sport and recreational fishing guidelines to make sure you’re fishing by the rules.

Rods for saltwater trolling of salmon range from 8 to 11 feet, and are most commonly used with at least 300 yards of monofilament fishing line with a test of around 25 or 30 lb. Note that chum fight the most when being reeled in, so a heavier rod, reel, and line for this type of salmon are recommended.

At Eagle Nook Resort, we provide you with the best high-end rods, reels, tackle and bait for catching saltwater salmon on the West Coast of BC.

In Canada, the federal Department of Fisheries and Oceans (DFO) regulates the amount of salmon people are allowed to keep (retain) and adjusts these limits as required, based on current and anticipated salmon populations. For the 2019 salmon fishing season on and around Vancouver Island, DFO regulations are as follows (subject to change):

Daily & Possession Limits for Salmon in BC

At any given time, the total possession limit of salmon per licensed angler onboard is eight, of which no more than four can be Chinook/King salmon.

The total annual limit for chinook salmon is 10. This number is down from 30 – a decision made by the DFO in spring 2019 to support the long-term viability of the salmon. You must immediately record in ink on your license all chinook you keep.

If you book a chartered fishing trip with Eagle Nook Resort, our fishing guides will help you adhere to these regulations. This is just one of the many advantages of our fishing tours. Learn more about what’s included in our Luxury Fishing Packages.

Bringing Your Salmon Home with You

Another advantage of chartering with Eagle Nook resort is that we include in our packages the portioning, filleting, and vacuum packing of your freshly caught salmon. We also provide you with an airline-approved cooler to help keep your fish stay fresh and frozen on your ride home. 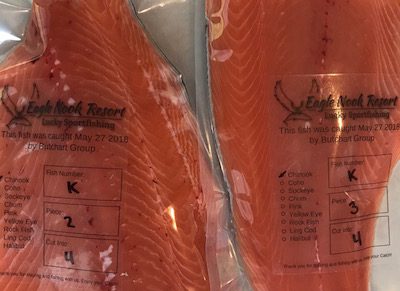 If you’re travelling outside of Canada, you can transport your salmon to the United States without any special paperwork required. If you are traveling somewhere outside of the US and Canada, check your destination country’s regulations to see if vacuum-packed frozen fish is allowable.

Ready to start fishing? If you’re new to salmon fishing, our guides will supply you with the best equipment for our local area. If you’re a seasoned angler, we’d also love to hear about some of the methods you have found successful, for salmon fishing as well as halibut fishing.

Learn more about our salmon and halibut chartered fishing packages, or call us at 604-357-3361 for any questions, bookings, or inquiries. Note that Eagle Nook Resort is almost fully booked for summer 2019, but there are still a few spaces available in July and toward the end of August. Or, book into the 2020 season now and have your choice of dates for next year!